We welcome Robert Hart Baker as Artistic Director of the Belleville Philharmonic Society and Music Director and Conductor of the Orchestra and Chorale. He has been the conductor of the St. Louis Philharmonic since 1982, and has served as principal guest conductor with the Asheville Lyric Opera Company since 2004. He is Music Director Laureate of the Harrisburg Choral Society & Orchestra and the York Symphony Orchestra & Chorus in Pennsylvania, and is conductor laureate of the Asheville Symphony Orchestra (which he led from 1981 to 2004). He was recently named a National Arts Associate of the Sigma Alpha Iota Music Fraternity.

His broad repertory of classical symphonic, opera, choral and ballet scores are complemented by his skills as a Pops conductor, and he has received critical praise on the podium here and abroad in all genres. His work with the York Symphony Association has earned two awards from the League of American Orchestras (Student Song Contest in 2003 and Saturday Morning Symphony in 2005). His DVD of the St. Louis Philharmonic Holiday Spectacular won the national Telly Award in 2004 for best classical local cable TV production. In December 2007, hisholi-day video with the Kirkwood Children’s Chorale was in the finals of NBC’s nationally-televised competition Clash Of The Choirs. His latest DVD with the same forces is “2015 Holiday Pops Concert”, with a Blu-ray video record-ing with the St. Louis Philharmonic “Mario Frangoulis & Friends” released in November 2012. He is currently on the faculty of Lindenwood University as Instructor of Oboe. His performance as oboist of the Bach Concerto for Violin and Oboe with violin soloist Odin Rathnam and the York Symphony is on YouTube. He is also Conductor of the Cadenza Orchestra as part of the St. Charles County Youth Orchestra staff, and serves as Artistic Consultant to artist management firm Price Rubin and Partners in Tulsa.

At the 10th anniversary concert of the Asheville Lyric Opera, he had the pleasure of conducting arias with a stellar cast of singers from the Metropolitan Opera, including soprano Angela Brown, tenor Tonio Di Paolo, and bari-tone Sherrill Milnes. He made his debut in 2010 with the Boston Pops as part of its 125th anniversary celebration, with violin soloist Lynn Chang. He has appeared as an opera conductor with the Spoleto Festival, Brevard Music Center, Connecticut, and Cullowhee Festival opera companies. At Spoleto, he made his European opera debut con-ducting Samuel Barber’s Antony and Cleopatra, and served as an assis-tant conductor to Gian Carlo Menotti. Robert was the founding Music Director of the Connecticut Philharmonic Orchestra at age 22, receiving critical acclaim for its debut in Boston Symphony Hall. He has compact disc and DVD releases on several record labels, including Denon, Ernest Bloch Society, and Sonari. His arrangement of the Borodin Nocturne for String Orchestra with the English Chamber Orchestra is a best-seller on Vanguard. He is married to flutist Barbra Duvall Baker. The busy musical couple has performed chamber music together at profes-sional music festivals in St. Petersburg, Russia; Cooperstown, NY and White Plains, NY (Performers of Westchester Series).

Dr. Baker holds a diploma in conducting from the Mozarteum Conservatory in Salzburg, where he studied with Herbert Von Karajan, and a Bachelors cum laude from Harvard where he studied conducting private-ly with Leonard Bernstein for two years, and was conductor of the Bach Society Orchestra for two seasons. He received his doctorate in orchestral conducting  from Yale in 1987, serving as an assistant to Aaron Copland and studying privately with Otto-Werner Mueller and Arthur Weisberg. He has twice won the ASCAP Award for Contemporary Music Programming, once during his tenure as Conductor with the New York Youth Symphony at Carnegie Hall, and once with the York Symphony. For eleven years, he served as the Music Director of the York Youth Symphony, and was named conductor laureate after successful debuts on tour to Carnegie Hall in New York and Heinz Hall in Pittsburgh. In 1999, he was awarded an Honorary Doctorate in Humane Letters from York College of Pennsylvania.

As a guest conductor he has appeared with many American orches-tras, including Billings, Chattanooga, Cheyenne, Flagstaff, Harrisburg, Muskegon, Providence, Quincy (IL), Roanoke and Radio City Music Hall, to name but a few.  His most recent international guest conducting engagements have been with the Regina Symphony (Canada), Orquestra do Norte (Portugal), the Vratza State Philharmonic Orchestra (Bulgaria), the Tito Schipa Symphony Orchestra (Italy), and the State of Mexico Symphony Orchestra. He has appeared as an opera conductor with the Spoleto Festival, Brevard Music Center, Connecticut, and Cullowhee Festival opera companies.  He has conducted the North Carolina Dance Theatre ballet company on three occasions. 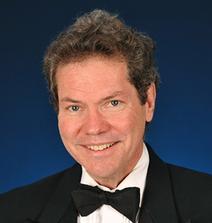