Celebrated for his "heroism" and "convincing technique" (ArtsNash), American pianist Brian Woods has emerged as a compelling artist of international acclaim. Woods' 2021-2022 season highlights include his solo debut for the World Piano Teachers Association, a debut as featured soloist for the Chamber Music Society of St. Louis, and concerto debuts with the Manassas Symphony, Southeast Missouri Symphony, Southern Illinois Symphony, and Belleville Philharmonic. Woods has recently been appointed Music Director for Classical Programming at the World Chess Hall of Fame, one of the premier venues for chamber music in Missouri.

A native of St. Louis, Woods has enjoyed success in numerous distinguished competitions, including the Verona International Piano Competition, The American Prize, the Music Teachers' National Association Young Artist Competition, and the Artist Presentation Society Auditions. Following his debut concerto performance at age eighteen, Woods maintains a diverse repertoire, ranging from Tchaikovsky and Liszt's First Concerti to Beethoven's Fifth, Brahms' Second, and Rachmaninoff's Third. He has since performed with such ensembles as the Masterworks Festival Orchestra, the University City Symphony Orchestra, the Shenandoah University Orchestra, and the Vanderbilt Oratorio Orchestra and Symphonic Choirs.

Past seasons have included solo recitals in Toronto, Washington D.C., St. Louis, Kansas City, Winchester, VA, Thibodaux, LA, and Dublin, Ireland. As a passionate chamber musician, Woods has collaborated with tenor Vinson Cole and cellist Julian Schwarz, among many other partners in the United States and Canada. He is equally at home with new music as he is with classical repertoire, and his work with the EDGE Ensemble in Virginia featured a complete program dedicated to the music of Avner Dorman, as well as performances of pieces by Ana Sokolovic and Joseph Schwantner. 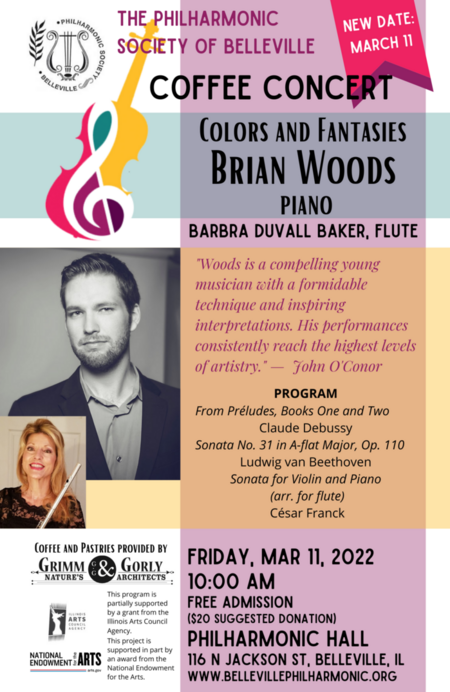