The Swiss pianist Christina Harnisch took her concert diplome with Franz Joseph Hirt at the Berne Conservatory and University. After working with Eduardo Vercellei she obtained the “Prix de Virtuositè“ Neuchâtel. She won several nacional and internacional prizes and study awards and subsequently embarked on further pianistic studies with Yvonne Lefébure in Paris, Louis Kentner in London, Vitalij Margulis in Freiburg/Br und Bruno Mezzena in Italy. Since then the versatile musician has continually appeared on concertstage in Switzerland and abroad as a soloist in piano recitals ,orchestra concerts (Südwestdeutsche Philharmonie, Berner Symphonieorchestra, San Francisco Sinfonietta, Orquesta nacional del Peru and others) and chambermusic concerts. Her repertoire ranges from Bach to contemporary music.
One main focus lies on the works of women composers (Cécile Chaminade, Clara Schumann, Fanny Mendelssohn , Grazyna Bacewicz u.a.)She played in many countries and performed in the Tonhalle Zurich, the Wienerkonzerthaus in Wien , the Purcell.room in London.. She also gives masterclasses on universities and conservatories. She toured in the USA, Southamerica, Europe , China, Thailand.
She made a big tour through China with concerts in the Forbidden City Concerthall in Beijing, the Hangzhou Grand Theatre a.o. In the last years she performed in Southamerica, Peru, Ecuador and Colombia, where she played with the Orquesta Nacional del Peru in Lima and took part on the “Festival Internacional de Musica Clasica Contemporanea“ in Lima.
She has a duo with Romano Pucci, first flutist of the “Orchestra del teatro alla Scala di Milano. Recently the Duo Pucci-Harnisch made a big tour in China, where they played with a big success in Shanghai in the “Shanghai Oriental Art Center“ and later on in Bangkok for the “Festival della Lingua Italiana“.
In the last years she made besides other concerts a big concert tour in India with concerts in Bangalore, Goa, Kolkata, Pune and New Delhi, a Thailand tour, played a solorecital in the Tonhalle Zurich and and performed with the Donausinfonieorchester the Cécile Chaminade piano concert for piano and orchestra in Zurich, Locarno (Palazzetto Fevi) and Locarno (Palazzo dei congressi).
Recently she played the Mendelssohn concert in sol minor Nr 1 in Budapest with the Donau Sinfonieorchester Budapest ,took part on the festival de la Francophonie in Poland with concerts in Warschau and Torun and made a big tour in Chile with six solorecitals in Santiago and Vina del Mar ( Fundacion de Providencia , Centro Cultural de los Carabineros , Teatro Municipal Vina del Mar )
She also performed as a soloist on festivals like “ Klavierfestival in Freiburg im Breisgau , Orbetello pianofestival Italy, festival internacional de Musica Clasica Contemporanea in Lima, a.o. and in Duo with Romano Pucci for the Festival internazionale Ruggero Leoncavallo in Brissago, the festival Chamberseries in the Oriental Art Center in Shanghai, , the festival “ Spiezer Schlosskonzerte , the festival della Lingua Italiana in Bangkok a.o.
Radio –, CD-, and TV recordings. 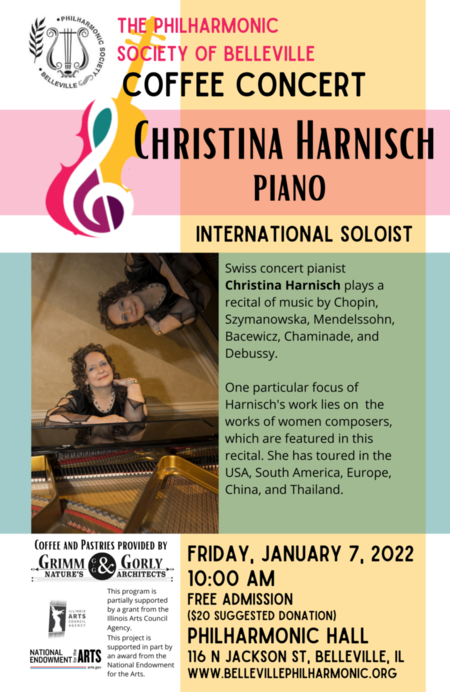